The Arabic Program at UNC is pleased to announce a Moroccan Night on Thursday, April 5th, from 6-8pm, at New West Building, Room 219. The event will be an opportunity for our students to learn and experience some aspects of the Moroccan culture. The program includes story sharing of students who went to study abroad in Morocco, singing by singer Abul-Bishr Kasmi, Moroccan tea and cookies and much more. Join us. The Persian Studies program and the University Libraries at UNC-Chapel Hill launch the inaugural Ferdowsi Tusi Graduate Paper Award. The winner of the inaugural Ferdowsi Tusi Award is Maziyar Faridi who presents his award-winning paper, “Férydoun Rahnéma’s Inappropriable Specters: Critique of Self-Identity and the Emergence of Iranian New Wave Cinema” on Monday, March 26, 2018, at 3:30 in room 504 at Wilson Library.

This spring, the Carolina Asia Center and UNC Kenan-Flagler Business School will participate in the Kakehashi Project, a fully funded youth exchange program between Japan and the United States. The program is designed to promote deeper cultural understanding among youth, create networking opportunities for future leaders of Japan-U.S exchanges and encourage future international work by broadening student perspectives. The University of North Carolina at Chapel Hill has received funding to support 15 business majors from UNC Kenan-Flagler, eight Asian studies majors and two faculty members who will spend a week in Japan over spring break.

Students will be joined by Sharon Cannon, clinical associate professor of management and corporate communication at UNC Kenan-Flagler, and Yuki Aratake, teaching associate professor in Japanese in the Asian studies department in the College of Arts and Sciences.

“This is a generous opportunity for our students to visit Japan largely cost-free,” said Carolina Asia Center director Morgan Pitelka, who applied for the opportunity through the Consulate-General of Japan in Atlanta. “It also represents an exciting collaboration between the College and UNC Kenan-Flagler, one that will bring many of these students their first global experience.”

In Japan, Carolina students and faculty will join a large group of program participants from other business schools around the U.S. While the program focuses on business, students will also learn about Japanese politics, society, culture, history, diplomatic policy, economics and much more.

After arriving in Tokyo, students will travel to Tochigi Prefecture, where they will visit leading Japanese companies and industries, see important landmarks in Japanese history and culture and travel to Nikko Futarasan Shrine.

Program experiences range from visiting high-tech companies across industries and attending a lecture at the Ministry of Foreign Affairs to learning about tea ceremonies and other cultural traditions.

Students will also have a home stay, giving them the opportunity to meet and stay with a Japanese family for a day and night.

At the end of the trip, the students will share a group presentation on their experiences and discuss post-program action plans for their return home.

The best attributes of the Student Health Action Coalition (SHAC) can be found in the genesis of its Mandarin interpreting service. SHAC, the longest running student-led free clinic in the country, allows its student leaders to creatively mobilize the resources needed to make sure the patients they see get the care they deserve.

Such is the story of Mandarin interpreting at SHAC. Need identified, strategy conceived and executed, need met.

It started in 2016 when the clinic’s co-directors noticed an increase in Mandarin-speaking patients. A former clinical co-director, Wen Lin, was fluent in Mandarin. He translated for a few patients during visits to SHAC. These patients told a few friends. And suddenly the number of Mandarin speakers seeking care at SHAC was growing dramatically. 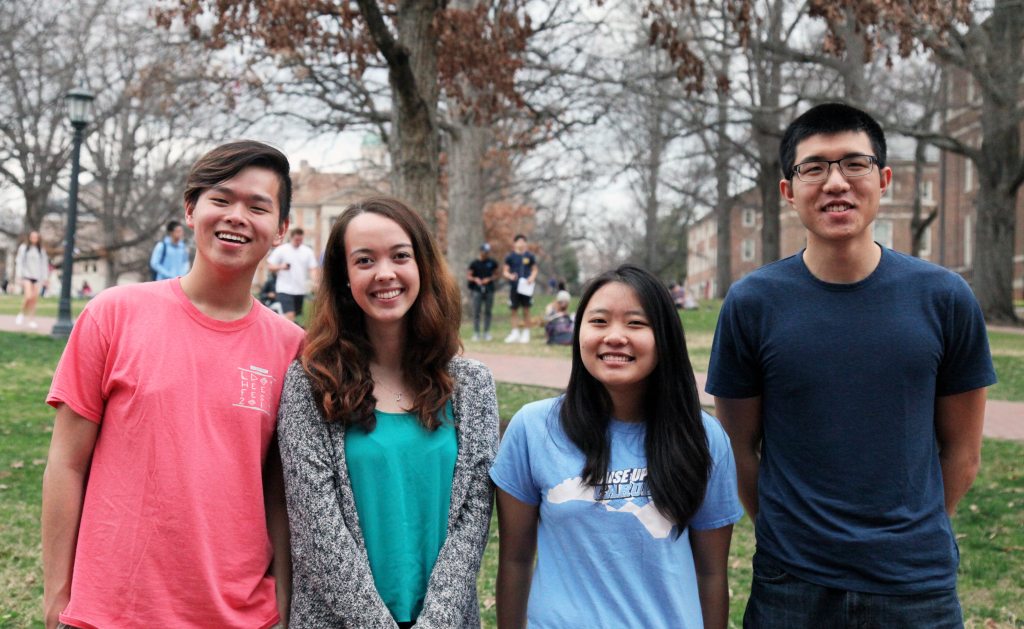 Lin graduated and moved on, but the patients kept coming. Evans Lodge and Caroline Fryar, who served as SHAC’s clinical co-directors in 2017, knew they had to do something.

“We knew there was clearly a need, lots of families that needed Mandarin interpreting services,” said Lodge. “If we don’t strive to meet that need these families will stop coming. But if we want to meet that need, then we have to figure out how to have a reliable set of interpreters here at SHAC all of the time.”

Lodge and Fryar leaned on another pillar of SHAC: its interdisciplinary approach to caring for patients.

“At its best, SHAC represents almost every school on campus working together,” Lodge said. “We saw the establishment of a Mandarin interpreting program as an opportunity to reach out to students who had not been traditionally involved in SHAC.”

SHAC’s leaders contacted Carolina’s Department of Asian Studies and asked if there were any students who would be interested in providing interpreting services at the clinic. The response was swift. Within a week, more than 30 students had expressed their willingness to get involved and desire to learn more.

Jimmy Chin, a senior majoring in Asian studies and economics, was one of the students who answered the call.

“I don’t necessarily have an interest in medicine, but I thought this was a cool idea, an opportunity to serve the community, and a chance to practice my Chinese,” Chin said.

“I was really inspired by the mission of SHAC and the commitment to providing care for all people and fighting health care inequality,” Blanks said.

Medical student Kyle Riker leads the Spanish interpreting team at SHAC. Since medical interpreting requires precise language usage, all interpreters are required to pass a competency exam. Blanks and Chin set out to translate the materials into Mandarin and were soon named the leaders of the new group of interpreters.

“It was surprisingly easy because there were so many students who were interested,” Riker said. “As soon as the assessment materials were up and running, we had students taking and passing the exam and then in the clinic helping patients.”

Now, each week at SHAC’s Wednesday medical clinic, Blanks and Chin – along with Jacky Zheng and Alyssa Guo – manage a team of four or five translators. When they are needed, they follow the patient throughout their clinic visit.

For students like Blanks and many of the interpreters, undergraduates with an interest in medicine, it’s an invaluable experience.

“The interpreters are right there in the room doing everything with the patient,” Lodge said. “They’re able to observe all of the interactions, which is a really cool thing if you’re a student interested in a career in health care.”

Of course, it’s an incredible benefit to the patients as well.

“The patients that we see are so thankful,” Blanks said. “When they realize there is someone there who can speak with them in Mandarin, you can see them relax.”

“When I first started working the front desk at SHAC it seemed like everyone who came in spoke Spanish, now it’s completely different,” Riker said. “(One Wednesday in late 2017) the entire first round of appointments was made up of Mandarin speakers, and every one of our interpreters was needed.”

SHAC is currently collecting demographic data on its patients, but leaders say they see a few reasons for the shifts.

Many Spanish speaking patients are now seen as part of SHAC’s Bridge to Care program, which provides long-term care for patients with chronic conditions like diabetes and hypertension. As a result, these longtime patients are less likely to come to the acute care medical clinic on Wednesday evenings.

Anecdotally, many of the Mandarin-speaking patients are family members of visiting scholars at Carolina or other surrounding Universities. Word of SHAC’s free services has spread through the community by word of mouth and the patients value SHAC as a place they can take their children for checkups, school physicals and vaccinations.

“I’ve observed that many of the Mandarin-speaking families that come to the clinic seem to know each other, or reference someone who told them about SHAC,” Riker said. “This is a community that’s very engaged and in constant communication.”

As the need continues to grow, Riker credits Blanks, Chin, Zheng, Guo, and their team of interpreters.

“They’ve done so much work on their own to build this team,” Riker said. “They have so much energy, are so excited, and have really allowed us to provide a great service.”

That energy, Lodge said, is a great addition to SHAC, and only furthers the organization’s legacy of working across the University to solve problems and meet the needs of the community it serves.

“If there are people on campus with skills we don’t have represented in our clinic, then we want to bring them in and utilize their expertise,” Lodge said. “In this case, there was an overwhelming and immediate need, and thankfully we were able to bring some great people together to make sure we could meet it.” Associate Professor Wendan Li has written a new book, Grounding in Chinese Written Narrative Discourse, where she provides insight into how Mandarin Chinese is capable of presenting major events within a narrative and distinguishes supporting text. Expect to see Dr. Li’s book, published by Brill, in March 2018. Bad Girls of the Arab World is an interdisciplinary collection of writings by and about Arab women that focus on Arab women’s often-fraught engagement with the boundaries that shape their lives. The book addresses the experiences of women from a range of ages, classes, and educational backgrounds who live in the Arab world and beyond. They include short pieces in which women reflect on their experiences with transgression; academic articles about performance, representation, activism, history, and social conditions; an artistic intervention; and afterwords by acclaimed novelists Laila al-Atrash and Miral al-Tahawy. The book demonstrates that women’s transgression is both an agent and a symptom of change, a site of both resistance and repression. Showing how transnational forces such as media discourses, mobility and confinement, globalization, and neoliberalism, as well as the legacy of colonialism, shape women’s badness, Bad Girls of the Arab World offers a rich portrait of women’s varied experiences at the boundaries of propriety in the twenty-first century. Associate Professor of Asian Studies Ji-Yeon Jo has published a new book, titled Homing: An Affective Topography of Ethnic Korean Return Migration (University of Hawaii Press, 2017). From the press’s description of the book, found here, we learn that:

“Homing investigates the experiences of legacy migrants—later-generation diaspora Koreans who ‘return’ to South Korea—from China, the Commonwealth of Independent States, and the United States. Unlike their parents or grandparents, they have no firsthand experience of their ancestral homeland. They inherited an imagined homeland through memories, stories, pictures, and traditions passed down by family and community, or through images disseminated by the media. When diaspora Koreans migrate to South Korea, they confront far more than a new living situation: they must navigate their own shifting emotions as their expectations for their new homeland—and its expectations of them—confront reality. Everyday experiences and social encounters—whether welcoming or humiliating—all contribute to their sense of belonging in the South.”

The book is available in both hardback and ebook editions. Congratulations Dr. Jo! In this essay, Adel argues that designing suitable textbooks is a crucial part of language learning and teaching, and that effective textbooks are developed by incorporating sound principles and theories of second language acquisition into material design within the field of Applied Linguistics.  In other words, it is important that the two aspects of practical undertaking and the theoretical studies inform and are informed by the actual development and use of learning materials, so that the materials teachers use in the classroom are principled and effective. At the ACTFL 2017 Convention in Nashville, Tennessee, Shahla Adel presented an unprecedented study where she compared the Language Learning Strategies of Heritage and Non-Heritage Learners of Persian and Arabic. Learning strategies are specific actions taken by the learner to make learning easier, faster, more enjoyable, more self-directed, more effective and more transferable to new situations. Significance of this study was that no one had previously compared the language learning strategies across these two languages.